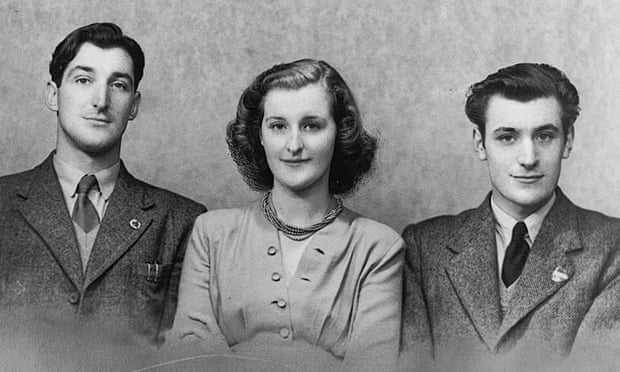 Born in Mytholmroyd, West Yorkshire, Olwyn was the middle child of William, a carpenter, and Edith (nee Farrar); an older brother, Gerald, emigrated to Australia after the second world war. The family’s end of terrace house was cramped, but a happy childhood included picnics at Hardcastle Crags and dips in the rocky pool on Cragg Vale. When Olwyn was 10, the family moved to the mining town of Mexborough, in South Yorkshire, where they took on a newspaper and tobacco shop. Olwyn was at first miserable, but soon began to lose herself in reading books and dabbling with horoscopes and Ouija boards.

On just six occasions during visits home, she met the young American woman whom Ted had married after a whirlwind romance in 1956. Their first impressions of each other were wary. Olwyn found Sylvia “poised and controlled, with a hint of reserve or constraint”. Sylvia thought Olwyn was “startlingly beautiful with amber-gold hair and eyes”, but felt that she was “quite selfish and squanders money on herself continually in extravagances of clothes and cigarettes, while she still owes Ted £50”. During their last encounter, over a Yorkshire family Christmas in 1960, Sylvia and Olwyn quarrelled fiercely. They never saw each other again.

Olwyn appears, briefly, In my novel Capriccio, based on the life of  Ted’s mistress, Assia Wevill.  Out of respect for the family I have changed her name, and that of other characters who were alive at the time I was writing the book. The following interview recorded a few years before her death, reveals much about this formidable woman:

“The nonsense that has continued to be written about the story is shocking to me. Sylvia wasn’t the innocent victim, or half so helpless as she’s been made out to be. You just have to look at some of her poetry. She was just nasty in the last poem about her husband and father [“Daddy”]. She was vicious and I think a bit crazy. I watched her going through her torment and it was agony. But Ted was so taken with her. I don’t know why. I don’t know how she did it … Especially because I don’t think that she could control the negativity in herself. You’ve got to remember the venom that Sylvia dished out.

I don’t think anyone has taken into account how injurious the rubbish that’s been written about her has been. What the feminists don’t take into account was how much psychological trouble she was in. She was a very difficult woman with a very difficult personality. She was horribly unjust both to her mother and to Ted. And I’m sick of reading that he left her for Assia – that’s all you get whenever his name is mentioned. Assia. But Ted didn’t walk out.”